These systems work by several wells acting in combination to lower groundwater levels across the area of the excavation. Pumping from an individual well lowers the groundwater level and creates a cone of depression or cone of drawdown centred on the well. Deep well dewatering systems involve multiple wells being pumped simultaneously. The cones of drawdown from each well interact and can lower groundwater level over a wide area beneath an excavation. The most common form of pumping is by electric submersible pumps. Therefore, because the technique does not operate on a suction principle, large drawdowns can be achieved, limited only by the depth of the wells, and the hydrogeological conditions.

The deep wells are generally sited just outside the area of proposed excavation, and are pumped by electric submersible pumps near the base of each well. Compared to wellpoint systems, deep wells are typically installed at relatively wide spacing, perhaps 10 to 50 m between wells. Each well is connected to water collection pipes (sometimes known as a discharge main). Each well is also provided with electrical power (from mains power or generators) via cables and distribution units. It is common to provide back up or standby generators to be used in the event that the duty power supply system is interupted. As well as the pumped wells there will be a requirement for monitoring wells to allow groundwater levels to be monitored. 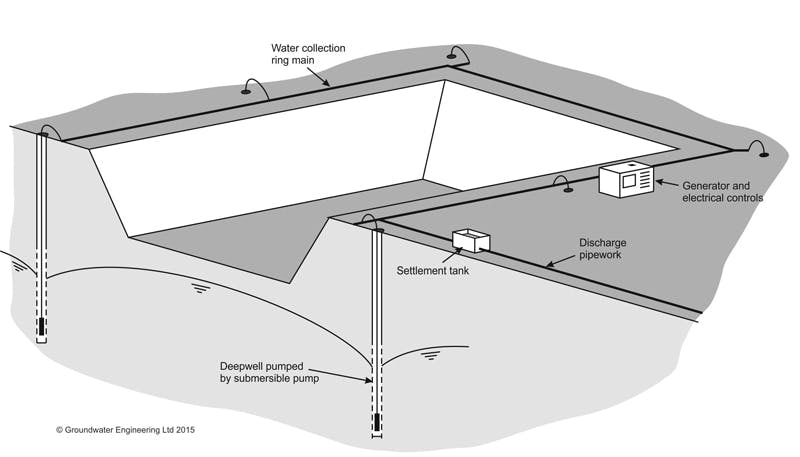 Wells are normally formed by drilling, using either rotary drilling or percussion drilling methods. Once the well is drilled, a perforated well screen is installed and surrounded by filter gravel. For most dewatering systems the internal diameter of a deep well is in the range 125 to 350 mm. The smaller end of the size range is normal for low flow rate systems and the larger diameter wells are normally used for higher flow rate systems. The internal diameter of the wells controls the maximum size of the pump that can be installed. The most common type of pump used in deep well dewatering systems is the slimline electric borehole submersible pump. These are special electric submersible pumps that are engineered to have a small external diameter so they can fit down inside the well screen. These pumps are typically powered by 3-phase electricity, and the power is provided to the pump via a ‘drop cable’ fed down the well. The water from the pump is carried up to the surface via a ‘riser pipe’ that can be sectional steel, sectional plastic or flexible hose.

One of the situations were deep wells can be less effective is in low permeability soils (such as silts or silty sands). In these cases the well yields can be very low, and large numbers of wells may be required. Such low well yields can make it difficult to select suitable submersible pumps that can operate reliably and efficiently at low flow rates. In such conditions an eductor well system (which can operate at very low flow rates) may be a more appropriate method.

This site uses Akismet to reduce spam. Learn how your comment data is processed.